I have been studying diversity in the police now for quite a while, and done a lot of reading around research that aims to put the nail on the head as to why there are issues in the police. Before you read any further, this isn’t a blog about protected characteristics like race, gender, religion etc., so don’t expect talk of percentages. Diversity is about difference, but not just bits of difference, all of it.

There’s some work by a gent called Muir from 1977. He suggests a ‘typology’ for policing. What’s a ‘typology’ I hear you ask? Well basically, it is a group of boxes or types, into which you can put groups of behaviour or people. He comes up with four ‘types’ through his research, and these are:

Now, before I discuss this, let’s get the critique out of the way. The research is old, it’s been tested (as best as you can test stuff like this) and it’s been found not to be totally accurate. Fair enough. It does however really chime with me and the people that I know in policing. (You can even see it on Twitter!) More importantly, it has really provided me with a framework within which to discuss difference in the cops. This is known as a heuristic, but I will stop there with the long words as they only bring me abuse 😉

What in the world is social capital? Good question. I haven’t totally tied it down yet, but it’s a term that I use to describe the value that is placed on particular behaviours in the workplace. Were I to rate the value on the above 4 types where I have worked, it would look like this: 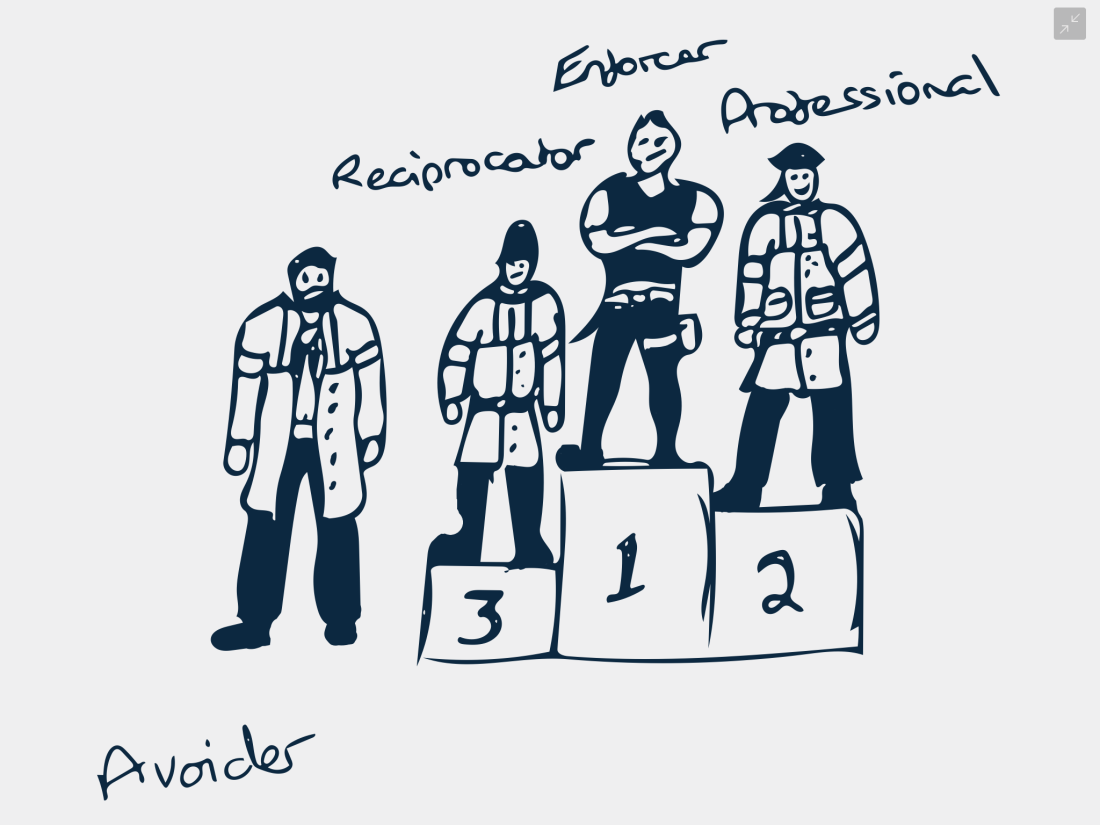 The behaviours that the enforcer show hold pride of place. Lots of enforcement and arrests and catching baddies. It was a type that was greatly encouraged by performance culture, and therefore it could be said that it has a large representation in our current leadership. The Professional also holds a solid place culturally, with lots of process to follow and value judgements to be made. As performance culture wanes, the Professional appears to be taking pride of place in the leadership battle. Reciprocators are often left on the back burner by the other two dominant cultures, and this is where our problems surface…

Avoiders are a toughey. I think that poor treatment of any of the types can create Avoiders, especially with regards to what I am about to discuss. I’m not convinced that they just need to leave the service. Some may, don’t get me wrong, but others may have been cast aside by the dominant type and thus spend their time feeling pretty worthless and shunted out. These people need empathy and support, especially with regards to bringing out their talents.

The issue with difference is a clear one. Enforcers will always want to enforce and use coercion, Reciprocators will want to do the opposite. Professionals will try and do both in some measure, but appear very measured and fence sitting as generally conservative views hold the status quo firm. Now if one of these types holds all the value (think performance culture), then down the line you will get exclusion. One or more of the types will be sidelined and forgotten about – or worse. You end up with a stark imbalance of leadership, and this just forces more exclusion and unhappiness.

So, how do we deal with this. Well, first Enforcers must see the value in Reciprocators, and Reciprocators must see the value in Enforcers. Professionals can’t fence sit, they must see that this battle is going on and ensure that the right talent goes in the right places. Reciprocators are often awesome in Neighbourhood Policing, Enforcers are absolutely necessary on Tactical Support Units. Both of these functions hold equal value, as the public absolutely need both of them. We just struggle to recognise it in ourselves.

Diversity is all about inclusion. It matters not if your Enforcers are black, white, Asian, pink, purple or green; they will ultimately display the same behaviours. That is not diversity. The staff might look different, but if they all behave the same there is no real difference at all. A neighbourhood policing team recognising and accepting an Enforcer onto their unit for what they are, and really making use of their talents is inclusion. A Tactical Support Unit accepting Reciprocators and allowing them to work in protest liaison is inclusion.

Knowing who is who and ensuring a balanced opportunity for progression, in an intelligent way that doesn’t lean too far into a particular type will ensure that exclusion isn’t designed into your workplace in the future. Leaders need to be savvy about who goes where, and know that a diverse team makes far better decisions.

An important question to ask.

Disclaimer. I am well aware that typologies are a generalisation and lump people into big boxes that aren’t always appropriate. This is really a blog about unconscious bias, and the typology allowed me to frame it in a way that I hope makes it easier to understand. As usual, very happy to receive feedback 🙂

One thought on “Difference, and why it’s hard in the cops today.”